The destroyer of the world, Lord Shiva. Lord Shiva is considered one of the strongest and most unique gods in the Hindu religion as he represents a combination of both good and evil. He is usually considered the destroyer of the negative energy amongst us and let positivity flow within. This destroying attitude is often regarded as angry and wrathful which also explains why he is depicted in a rage most of the time. 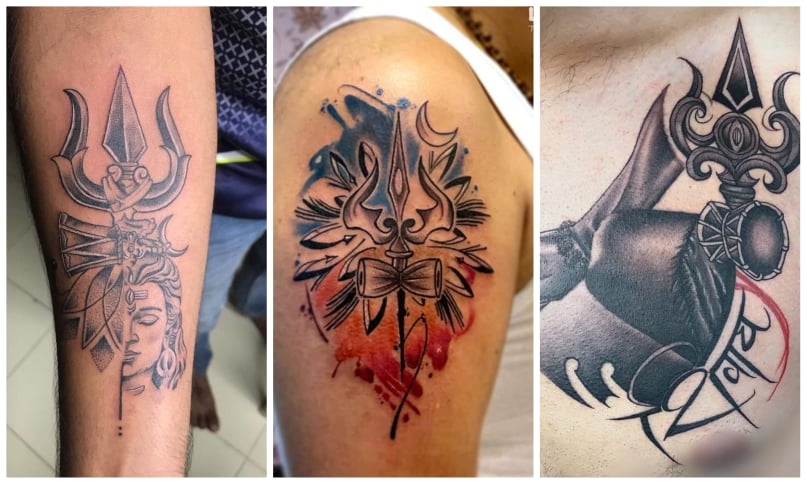 The tattoo representation of this creator, destroyer, and preserver is so strong and powerful that it is demanded by people who are not related to Hinduism by leaps and bounds. Lord Shiva tattoo is one of the best tattoo options to choose from.

Lord Shiva tattoo holding his weapon is very common. Trishula holds a lot of significance as it represents the mastery of Shiva over the three phases of human life. Trishula is the three branches trident that the lord carries with him always. It also stands for the balance of will, action, and knowledge. This tattoo design is famous among the youngsters majorly, as it gives them a sense of control over their life.

This Lord Shiva tattoo design makes an impact with its intricate work and heavy shading. Best if done in the arm or back as it gives more surface area for its design. This tattoo contains Shiva, the serpent, temple and the trishula. This gives a complete idea of all the things associated with the supreme lord.

3. Shiva with His Snake

The serpent is the symbol of alertness. It is when in the state of meditation, it is assumed that one is in a state of a deep sleep, but it is not so. Instead, the person is in a state of alertness. A rather small tattoo holding a deep meaning, this design shows that it need not be big to make an impression. But in case you choose to make it big, the back can prove to be the best place. That will give you an option to show it when you want and hide when you need to. A small tattoo or a big one, its the meaning that really matters.

There are many chants that people prefer writing with their tattoos. It adds more meaning to the tattoo. The deep black ink gives it a sense of power and stability. The chant below gives it the needed religious undertones. Hence opting for this tattoo design is a good idea after all.

Shiva is the most supreme power among all the other gods and that is why he is also the most favored one. He is the god of meditation and of yogis too. There are millions of people all over the world that worship him. Many of them get inked with the design of Shiva too to reflect their spiritual and religious beliefs. This is the reason people choose this kind of tattoos. It shows a calm shiva busy meditating.

This is a very creative design that represents half the face of lord shiva with the other half replaced by the majestic weapon, Trishula. The tattoo is also supplemented by the flower of enlightenment, lotus, and gems and stones. This tattoo shows the majesty of lord shiva. Although a tattoo like this does not need any other colour to make an impact, you can surely add colours to make it look more attractive.

8.  The Shiva and Parvati Tattoo

This is a great depiction of Shiva and his wife Parvati. Shiva’s female constant is Parvati. It is due to his generosity and love for his wife Parvati that Shiva is also considered to be an ideal husband for many. Lord Shiva is also said to be someone who can’t be separated from Parvati. There is no Shiva without Shakti and no Shakti without Shiva. The two are one or what is known as the absolute state of being. This tattoo is a perfect example of the love that a couple must share. It has beautiful intricate designs and exhaustive tattoo work.

The meaning of the Shiva tattoo is highly individual. The same is true for placement ideas. This amazing tattoo design covers the whole of the forearm, giving it a heavy look. This huge tattoo is sure to catch everyone’s attention, you shake a hand with.

While every other tattoo design is getting its abstract form, here is the abstract of Lord Shiva tattoo designs. Easy to get inked and less time-consuming. This design is subtle yet beautiful. It represents that you don’t have to be loud and vibrant to leave a mark. In this tattoo, you can only see the face of the lord and not the whole body. It is great for someone who wants to keep his tattoo small and simple. The major symbol of the lord is visible even though the whole design is done with the shadowed effect.

Although most tattoo enthusiasts go for a black ink tattoo of Lord Shiva if you want to give a realistic depiction like that on the idols or paintings, go for some colours. The colours add a different innocence and vibrancy to the often angry tattoos of Shiva. While blue is the dominant colour, you can customize the colours to make your shiva tattoo pretty personal. You can also think of innovative styles to make your shiva tattoo look distinctive.

This kind of tattoo design is very famous and many people opt for it. The meditating tattoo of shiva brings peace and calmness to the mind. This tattoo represents shiva in a calm state. While every other tattoo tries to depict the angry side this stands out due to its unique concept.

The Trishul is a symbol of power; that is the reason many people tend to have it on their bodies. This shows that they have power and control over their own lives. It can also be used as a symbol of protection, as the gods used the original Trishul to protect their followers from evil. This is a very famous tattoo representation of Lord Shiva tattoo designs. You can make it look more appealing by adding colours to it.

The whole universe has nothing but rhythms which is the universal energy rising and collapsing, which is exactly what the shape of the Damru signifies. It’s broad from the upper part and becomes narrow only to expand again. It has also been proven by science that the universe is nothing but made up of waves. Therefore, the musical instrument, Damru represents the non-dual nature of the world.

20+ Spiritual Om Tattoo Designs Ideas For Both Men and Women 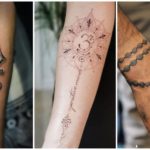 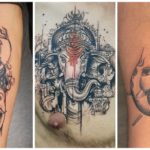